Curvy Spine and Align Clinic join forces to provide the best conservative care for children and adults with scoliosis. Contact us to find out when is the next WCR brace clinic in Edmonton. 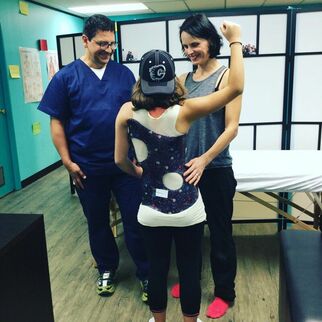 What is a WCR brace?

The WCR brace is a thermoplastic scoliosis brace modelled on a hyper-corrected positive plaster cast of the patient. This is a 3-dimensional correctional brace which has significant pressure and expansion areas built into the brace, providing correction in all three anatomical planes. Brace follows the general correction principle as was written by Dubousset: “detorsion and sagittal plane normalization, which would effect correction of the coronal and transversal planes, resulting in some elongation of the spine, without any significant distraction force,” (Rigo, 2001, Wood 2003). The WCR brace utilizes both X-rays and clinical photos of the patient to determine curve type and brace design.

Is the WCR brace a night time or day time brace?

It is both. A full-time brace and usually worn 22 to 23 hours/ day (off 1 hour for bathing, changing clothes etc) It could be used as a night time brace only if indicated by your doctor, however it is most often used as a full-time brace. This determination is made based on the patient’s risk of progression.

Do you need a prescription for scoliosis braces (WCR brace and other TLSO braces)?

Yes, a prescription by an MD is required to have a brace fit and delivered to a scoliosis patient.

Is a plaster mold required?

A mold is required to capture the patients exact body shape. This process is done using an iPad with Sensor Scan technology to digitally capture the unique shape of your body.

Is the scoliosis brace (WCR) uncomfortable?

Is the WCR brace heavy?

No, it is fabricated in a thin thermoplastic, called polypropylene, which is light weight.

Is the brace rigid?

Yes, it is, however the pressure and expansion zones of the brace allow for bony prominences and soft tissues, therefore the patient normally tolerates the brace well. These are classified as semi-rigid TLSO braces (not hard braces).

Can you notice the brace under the patient's clothes?

This depends on how tight or loose the patient’s clothes fit. Normally, the brace is unnoticeable from the front view, however it may be noticed in the back view. Some curve types require different expansion areas and locations that could be more noticeable compared with other curve types which may require a less noticeable brace design.

How often does the brace need to be adjusted?

How often does the brace need to be adjusted?